What Is a Director Compensation Plan Agreement?

A director compensation plan agreement is meant for non-executive directors who are not involved in managerial or financial duties of the company. As the name suggests, the executive agrees to the company withholding a certain percentage of their compensation. The portion which is withheld is invested by the company on their behalf, and they can claim this at a certain date in the future.

This applies only to a certain category of executives who are usually part of senior management or those whose earnings are above a certain limit.

When Do You Need a Director Compensation Plan Agreement?

The information that should be part of such plans are:

When drafting the agreement, you can refer to a director compensation plan sample contract. Here are the points to be kept in mind when drafting a contract:

The key terms or clauses in the director compensation plan agreement are as under:

If the company does not want to continue with the agreement, then under restitution, the director has to restore the company to its original position by returning the compensation paid.

If the contract was prepared with a fraudulent intention, then it may be canceled under rescission. Alternatively, a fresh contract can be drawn by the court.

Under specific performance, the director will have to fulfill their contractual obligation, and money damages will not be accepted by the company. 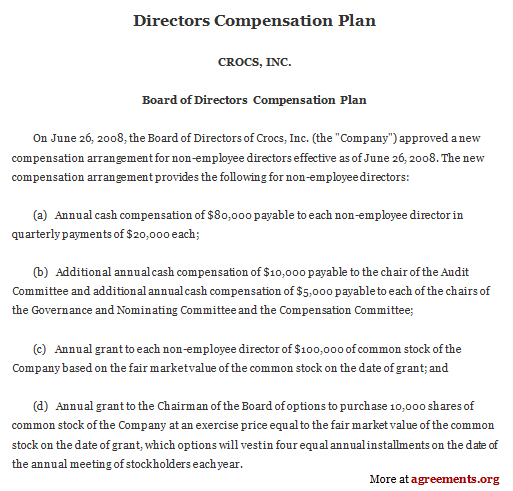