A Deposit Agreement is created when a person deposits an asset with another party. These agreements are usually used when an investor makes a deposit with a bank, and the bank provides a guaranteed rate of return in exchange for keeping the deposit for a fixed period of time (usually several months to several years). This agreement lays down the terms and conditions as to how the deposited assets shall be handled by the party with whom it is deposited.

When Do You Need a Deposit Agreement?

A deposit agreement is needed when an individual deposit an asset with another person. This is usually the case when an investor makes a deposit with a bank. Under the agreement, the bank guarantees that there is a return of the investor’s principal and pays a fixed rate of interest until the contract ends.

Inclusions in a Deposit Agreement

Apart from this, the agreement must clearly mention under which law it will be governed and how the agreement shall be terminated. The manner in which the agreement is to be modified should also be described to avoid any confusion in the future.

How to Draft a Deposit Agreement?

The following are the steps to follow while drafting an agreement:

Benefits of a Deposit Agreement

Key Clauses in a Deposit Agreement

The following are the key terms of this agreement.

What Happens When You Violate a Deposit Agreement?

Alternatively, any other form of dispute resolution, such as mediation or negotiation, may also be mentioned in the agreement.

Sample of a Deposit Agreement 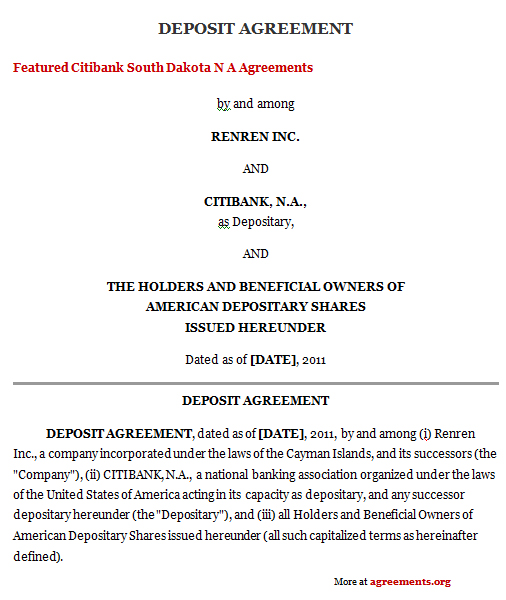