A Deferred Compensation Agreement is a legal document that is created that is created between an employer and an employee wherein it is mutually decided that a set portion of the funds to be paid to the employee will be deferred or kept aside to be paid at a later date. The most application of a deferred payment system can be found in options such as a retirement plan, a pension plan, and insurance plan among many others. This legal document acts as a bond of trust between both the organizations and outlines the terms and conditions under which the deferred compensation plan has been agreed upon.

This document states the dates on which the deferred amount will be paid to the said party, the rate of tax that will be applicable and also mentions the amount of benefits the party will receive since he or she has agreed to a deferred compensation plan.

When Do You Need a Deferred Compensation Agreement?

The most common application of such a contract or legal document can be found in a company or organization where there is a contract between the employer and the employee. In this contract, the employer clearly mentions the percentage of funds that will be kept aside as deferred and for how long such funds will be kept. The main principle of keeping aside a certain portion of the employee’s salary is to make a large whole sum amount that can be handed out or withdrawn whenever there is a need.

How to Draft a Deferred Compensation Agreement?

Follow the mentioned below steps in order to draw an agreement.

Benefits of a Deferred Compensation Agreement

The benefits of having a Deferred Compensation Agreement are outlined as below. 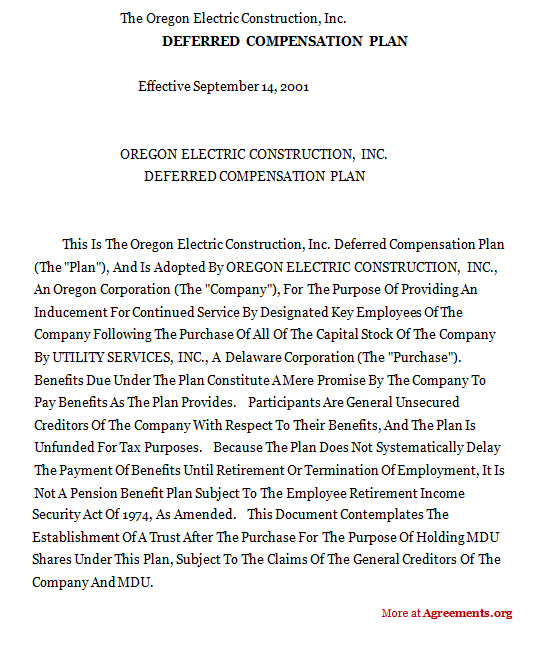