It is also known as convertible debt agreement or conversion of loan into equity agreement. No cash transaction takes place in this agreement and all the adjustments of the debt are made through the transfer of equity which is stated in the agreement. The debt to equity conversion is finalized when the lender agrees to the same and all the terms and conditions are thereof decided.

When Do You Need a Debt to Equity Conversion Agreement?

Key Terms of Debt to Equity Conversion Agreement Include:

The two parties who sign the agreement for effective conversion include:

The agreement includes all the details and signatures of both parties involved. The effective date is the date on which the conversion is done by agreeing on various terms and conditions.

How to Draft a Debt to Equity Conversion Agreement

Also, note that some debt agreements include the debt to equity conversion clause already depending on various conditions stated.

Having a verbal agreement over financial deals especially involving money is a bad idea on so many levels. The debt to equity conversion agreement has the following benefits:

Conversion of loan into equity by a private company also needs to have an agreement to avoid future consequences. The consequences of not having an agreement might result in conflicts between the two parties if the company recovers.

Apart from the basic information like the general information of the parties involved and the amount of debt some other details are also included in the agreement. The debt to equity conversion agreement includes: 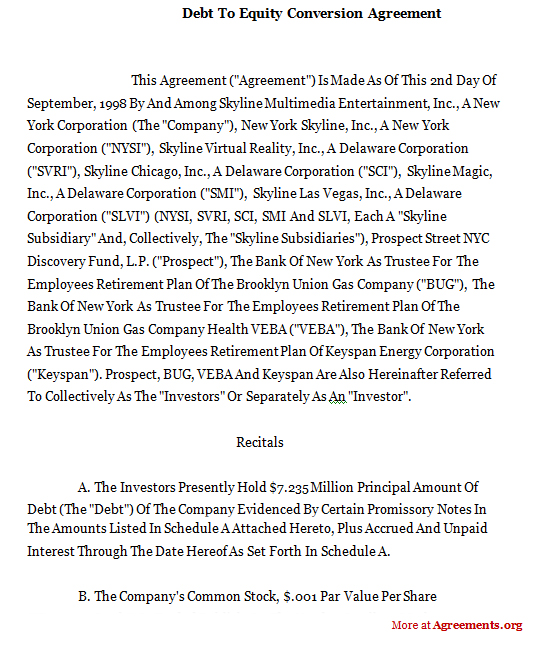 Tags:Conversion of Loan into Equity by Private CompanyConverting debt to equity tax implications