What Is a Debt Settlement Agreement?

A debt settlement agreement is a contract drafted between a creditor and a debtor when the debtor requires early settlement or a reduced payment due to his inability to pay back his debts. This agreement is mainly used to compromise. This usually happens when the debtor only owes the last payment. To save on time, creditor might accept a reduced payment, usually 70% of the original payment value, for payment early

When Do You Need a Debt Settlement Agreement?

To protect his interests instead of gambling on whether the debtor would repay the debt or not, creditors might decide to collect the dues early even if that means collecting a lower amount. This way a certain part of the burden is also lifted from the debtor’s shoulders without having to sacrifice his credit score or his relationship.

Inclusions in the Debt Settlement Agreement

How to Draft a Debt Settlement Agreement?

The following are the steps to follow while drafting a Debt Settlement And Subscription Agreement:

Benefits of the Debt Settlement Agreement

The key terms in a Debt Settlement And Subscription Agreement are as follows:

There are only two types of violations in this contract – the debtor does not pay the required amount within the required time period or the buyer’s payment does not go through because he’s insolvent or because he does not have enough funds. In this case, the agreement should have a provision where the original agreement would come back into force in addition to certain penalties. The parties may arbitrate or settle. The last action would be to approach the court for specific performance or compensatory damages. 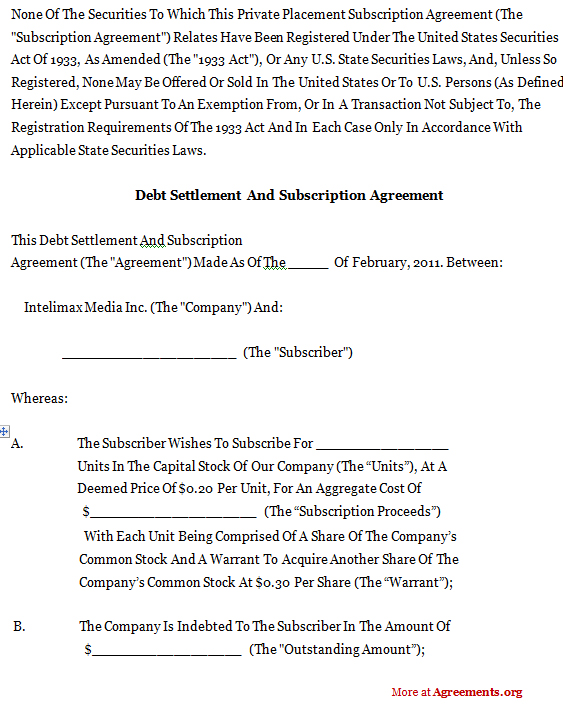