When a borrower takes a loan from the bank in an exchange of physical asset or collateral such as shares, they both enter into a custodial pledge and security agreement. In many other pledge agreements, only documents are pledged to the bank as security but in the case of custodial agreements, security is given to the bank.

Usually, the money landed by a bank in such cases is huge, so such an agreement is paramount to keep things in the record. In addition, for the borrower too, the value of collateral matters a lot and thus, they would also prefer to keep the record of everything they are pledging on an agreement.

Other names of the agreement:

When Is Custodial Pledge and Security Agreement Needed?

To curb all challenges of unsecured loans, secured loans are preferred more. Any point in time if the borrower has a physical asset to give to the bank in its custody as a security, a value ranging from 50%-95% of asset value can be lent by the bank. Bigger the security value, bigger the loan.

It is advisable for investors to use custodial pledge and security agreement to keep the interest rate low, have access to cash and to mitigate disruptions in investment strategy.

The agreement will very clearly assert that if the borrower fails to pay the loan and interest, the lender will have the right to put a lien on the collateral. Lien is a legal term used for the lender’s claim to security.

It is also important to mention the details of the interest rate, details of how it will be paid to the bank by the borrower and, the repayment modes or terms.

How To Draft Custodial Pledge and Security Agreement?

In most cases, banks lend money that is less than the market price of the security at the time of agreement but with the help of an additional provision, loan value can be increased. For instance, if a borrower has more bonds in its portfolio then the bank can approve a bigger loan. Similarly, “perfecting a security interest” is what bank can use for additional security, further leading to better loan to the borrower. It requires the filing of UCC-1 form by lenders.

To draft a custodial agreement, it is very important to take care of all such things. A good draft will have details of obligation, details of parties involved, terms of repayment and interest rate details. It is suggested that one should take an expert’s opinion while drafting an agreement.

While there are many benefits of this agreement, there are also some downsides. In case the market value of collateral decreases, the bank will take additional money beyond collateral value and interest rate to balance the margin. This puts heavy pressure on the borrower. In the case of stock security, if the stock value goes down, lenders can also sell the shares

Before drafting an agreement, both the lender and borrower should take care of some of the key clauses.

What Happens When you Violate Custodial Pledge and Security Agreement?

Custodial pledge and security agreement is relatively easy to draft but it’s a very important document that protects both the lenders and borrowers. It’s suggested that one should take the help of an expert while drafting it. Here is a sample drafted by our experts. 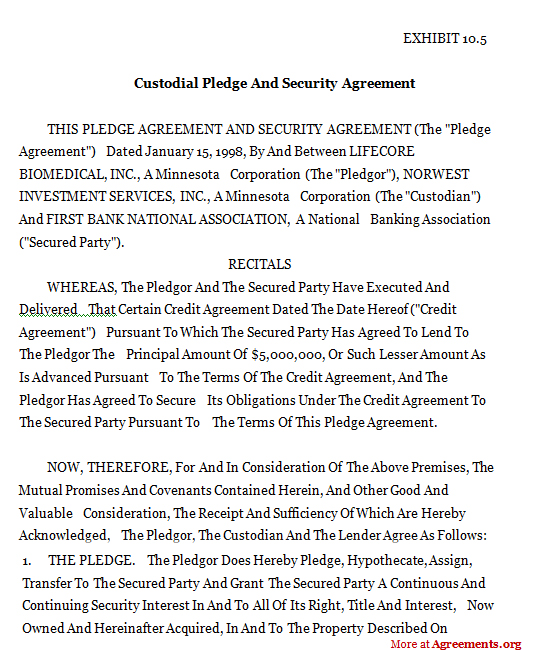