A Custodial Agreement is a legal contract between a company and a third party who undertakes the responsibility of a particular asset on behalf of the company for a specified duration. An example of such agreements can be found in the California custodial agreement template. Companies normally entrust state agencies or companies with the responsibility of benefits’ administration such as retirement plans. The third party has to collect the contributions from both the employer and the employees, invest the funds into an authorized instrument and disburse the benefits when they are due.

When Do You Need A Custodial Agreement

A custodial agreement is required when a company wants to provide a benefit plan for its employees as per statutory regulations. The purpose of this agreement is to appoint a third party who will take responsibility for the disbursal of benefits to the employees as and when the benefits are due.

The custodian of the funds is responsible for ensuring that the funds are properly invested as per a mandate in instruments suggested by the statutory regulators. The custodian is not liable if the employer does not make a matching contribution along with the employee. Any taxes which need to be paid during the disbursement of funds is the responsibility of the employee.

A custodial agreement for business is required to comply with the laws of the state under whose jurisdiction the agreement is being drafted.

Inclusions In A Custodial Agreement

A custodial agreement must include the names of the organization and the third party as it is a bipartite agreement. A custodial agreement template should also include the effective date of the agreement, the asset whose custody is being entrusted by the employer, the duration of the custody, the benefits to be administered on the due date, the rights and responsibilities of the employer and the custodian.

A Company Custodial Agreement ICCA is an example of a custodial agreement where the depositor entrusts the custodian with establishing an individual retirement account. In the event of the death of the depositor, the disbursement of benefits to the beneficiary will also be mentioned. The instrument in which the funds will be invested also needs to be mentioned in this agreement document.

How To Draft A Custodial Agreement

While drafting an agreement, the following points need to be kept in mind:

Benefits Of A Custodial Agreement

The benefits of having this agreement are:

The types of agreement are mentioned below:

The key terms of a custodial agreement are mentioned here:

If you want to provide employee benefits plans through a third party, then a custodial agreement is mandatory. 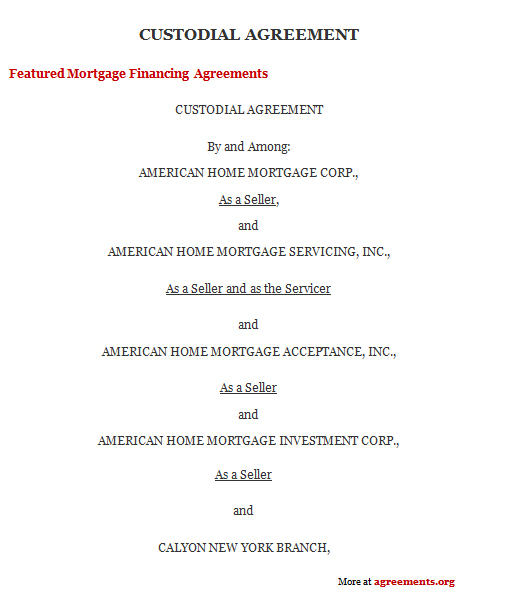