A cross collateralization and cross default agreement is signed between a lender and a borrower. This agreement is valid if a borrower has more than one type of loans with the same bank. Each of those loans should be secured with a collateral. In such case, this agreement can be drafted to ensure that both the loans are protected from any possible default by the buyer.

Why Do You Need a Cross Collateralization Cross Default Agreement?

Lenders need to be assured of repayment for their loans. When a person has two loans from the same financial institution, there is a higher risk of default. Such default in the payment by the buyer constitutes a default under the loan agreement itself. In that case, the lender is entitled to use the remedies mentioned in the loan agreement. One of those remedies is to use the secured collateral documents to ensure repayment of the defaulted loan — made under a cross default clause loan agreement.

How to Draft the Cross Collateralization Cross Default Agreement?

When drafting a cross collateralization cross default agreements, some points that need to be kept in mind are

Some benefits of this agreement are

Both the sections are vital to defining the terms & conditions of the contract while laying out grounds for following the principles as stated in the contract.

What Happens in Case of a Violation?

In case of a default, the clauses for curing the default lies with the other pool of borrowers. The clauses contain relevant provisions for determining the extent of contribution by each pool. In simpler words, the collateral for the other loan would be used to reimburse this loan as well after due notices have been sent. Since most collaterals are more than the value of the loan, lenders’ NPAs can decrease.

A cross collateralization poses greater for the buyer and higher pressure to repay the loan. However, if done properly, both parties can benefit from it because of the security offered in the loan. 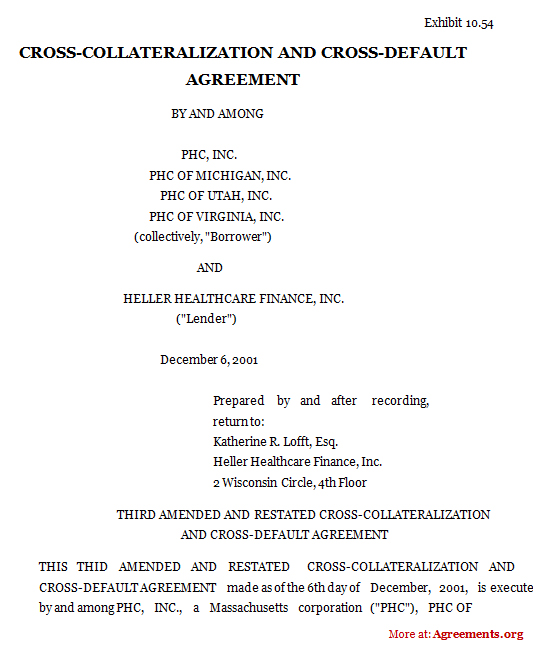