We often see two individuals, governments, parties or business corporations coming together to work on a common goal. In such cases, both the parties pool in their resources and intelligence to achieve the goal. Such an association requires a preliminary agreement between them before a full and final subsequent agreement.

A Cooperation Agreement is a preliminary agreement, signed by both these said parties to define basic terms and details of their mutual goal. It is really important to note that this agreement is only the first step in the direction of more elaborate and a detailed contract.

This Agreement is also called as a Memorandum of Understanding or Cooperation Contract.

Another name for this agreement is Business Cooperation Agreement.

When Is Cooperation Agreement Needed?

When two individual parties have their own set of resources and skills, and also have a common goal to accomplish but realize that the goal can be reached better and faster if these resources and skills merge, an alliance is formed between them.  Such alliances are both necessary and productive for companies to create products or for the government to work on an inter-government project.

This agreement is needed to represent the pact and alliance between them. This agreement is a lot different from the Merger Agreement. In fact, it’s needs of the hour for people to build associations and professional relationships to create better results without actually merging the businesses.

Purpose Of A Cooperation Agreement:

Apart from common details such as names, addresses and contact details of the involved parties, Cooperation Agreement must also include details and time period of the project or business venture for which both the parties have decided to cooperate. Like any other association or partnership, this one also requires both the parties to share responsibilities and roles. The agreement must consist of any such responsibility and role owned by either of the party.

In this agreement, the terms and conditions play a vital role. The agreement should be framed keeping in mind that there should not be any dispute or confusion between both the parties involved, when they eventually start working.

How to Draft Cooperation Agreement?

Here is a step by step procedure to draft the agreement –

It is suggested that both the parties should pay close attention to all the clauses of a Cooperation Agreement. It saves them from any confusion in the future.

What Happens When You Violate Cooperation Agreement?

The governing law mentioned in the agreement will help both the parties in the case of any dispute, breach and violation. Both the parties are well within their rights to approach the court in such cases.

However, it should be noted that one party can also choose to terminate the agreement by paying some amount if the agreement holds any such clause in it. Thus, it is really important to carefully specify the information about termination.

Cooperation agreements are very common and fairly easy but yet, they are a very crucial and key document for the parties involved.  You can download one sample from here, it is prepared by a US attorney. 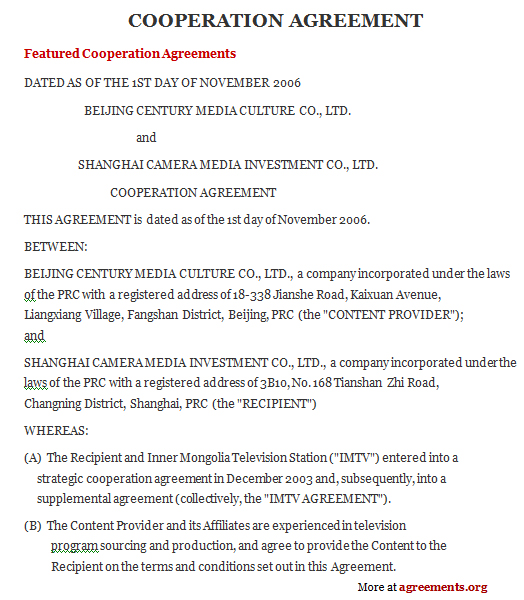