What is Conversion of Debenture Agreement?

For example, A issues debentures to B in lieu of loans. A fails to repay the debt, B converts these shares and realizes his money. These contracts entail a liability incurred by the issuing company recoverable by the debenture holder.  Convertible debentures are hybrid securities which may be used as both equity and bonds, originally issued as bonds these debentures may be, by the issue of notice, be converted to shares on the behest of the debenture holder.

The contract so formed between a debenture holder and the company converting these debentures into equity shares is known as debenture conversion agreement.

Purpose of Conversion of Debenture Agreement

The purpose of such a contract is to provide a simple acknowledgment and outline the requisite clauses that govern such a transfer. It prescribes various rights that are vested on the debenture holder due to this conversion. Since Convertible debentures are hybrid products that strike a balance between debt and equity, debenture holders stand to gain in the sense that they have assured yield of fixed interest payments, while also having the prerogative to convert the loan to equity shares if the company business increases, raising the stocks over price, over time.

Having a standard timeline for the conversion of debentures and a pre-agreed price assures the debenture holder.

Inclusions in Conversion of Debenture Agreement

A conversion of debenture agreement typically should include the names of the parties, their relationship and the purpose behind assigning of debentures. As it entitles the holder of debentures for the conversion of the same, it is pertinent to highlight certain default events when such conversion entitlement is triggered. A set of boilerplate clauses like dispute resolution, waiver, notice, severability, etc. should also be a part of this contract.

Important terms that must be understood when drafting this agreement are:

Advantages of a Conversion of Debenture Agreement

The advantage of debenture conversion agreements is also that as with any debt instrument, whether it’s a bond or loan, the debt needs to be repaid. Too many debts on the company would only lead to high debt servicing costs that include interest payments. This would eventually result in high debt servicing costs including interest payments and lead to volatile earnings. This issue is mitigated by way of issuing equity shares. This is because equity, unlike debentures, does not require repayment, nor does it require the payment of interest to holders.

However, a company might pay dividends to shareholders, which although voluntary, could be seen as a cost of issuing equity since the firm’s retained earnings or accumulated profits would be reduced.

Having a contract governing the conversion of debentures in place is important to provide security to the debenture holder that in the event his loan remains unpaid, he can recover his dues by converting his debentures into equity. It also provides comfort to the issuer company, as it has all the terms and conditions outlined clearly.

Sample for Conversion of Debenture Agreement 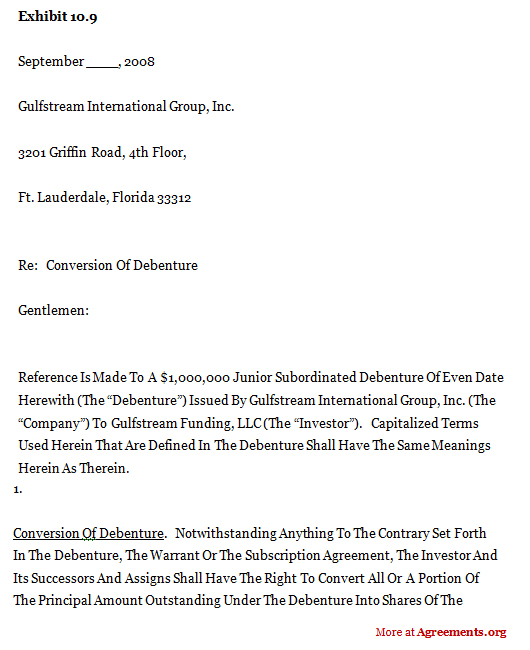