Contract mining agreement is the contract between two parties, who are the owner of the mine and the contract miner. The owner of coal mine or any other mineral mine can engage a second party to work as an independent contractor in his mine.

To do the same, both the parties need to sign a contract called the mining agreement. So, this agreement establishes the business relationship between both the parties, explain the additional terms and conditions, responsibilities and agreement terms, etc.

Through this contact, the owner provides the right to work in the mining area for a specific period in exchange for a particular amount. This agreement between the mine owner and contract miner also safeguards the rights of both the parties. Each of the parties can extend the contract period if they wish to.

When do you need the Contract Mining Agreement?

Whenever the owner of the mine decides to let some other mine contractors work or run a program on his mine, he needs to sign this agreement. It assures both the parties about their legal rights and helps them understand the terms of that particular agreement in detail.

The parties involved in any mining project are bound to go through the arrangement or Contract Mining agreement to understand and practice specific rights and liabilities related to the mining project. Apart from that, they also understand and become liable to abide by the norms related to the environment and the people involved in the mining land.

The agreement is a proof of the consent of the parties and their settlement about the laid-out rules. Written documents are necessary to avoid any violation of the terms mentioned in the agreement.

General Clauses to be included in a Contract Mining Agreement

How to Draft Contract Mining Agreement?

Generally, private companies get the exploration and mining rights. There are two essential types of the mining contract. The standard form of mining agreement is known as Exclusive Prospecting Licences and Mining Licences. Apart from that, the Production Sharing Agreement, Mining Development Agreement, and Community Development Agreement are also the essential types of modern-day Contract Mining Agreements. 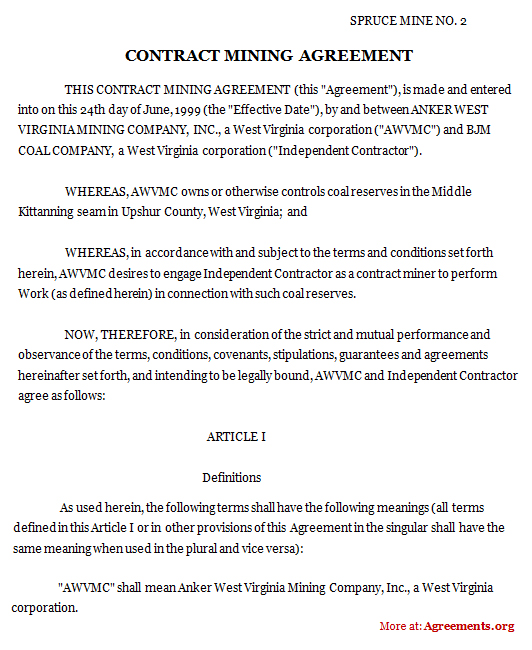