A Brief Introduction of Consulting Agreement

This agreement covers all the details that are important to the entire matter at hand. It is an important agreement that provides proof of the entire transaction.

Purpose of the Consulting Agreement – Why Do You Need It?

The purpose of a consulting agreement is to lay down in writing the terms and conditions under which the consultant has been hired to provide certain consultancy services. The agreement is necessary as it is important to have all the important terms written down in detail so as to prevent any confusion in the future and to avoid any conflict. When such an agreement is in place, it helps the parties have a complete understanding of the entire transaction and leaves no room for any error or misunderstanding. All the particulars such as the scope of the consulting services, the mode of payment to the consultant, and other important details will be a part of the agreement, and this provides confirmation of all the specifics.

The purpose of the agreement is to support the rights and interests of the parties in case one party violates the clauses of the contract. This agreement helps to have written proof of the specific details agreed to by the parties. Additionally, the contract will also provide for remedies to make sure that each party can protect their rights under this agreement. The various acts that can be deemed to be a breach of the agreed terms will be listed out, and a remedy will be provided for each one of them.

Contents of the Consulting Agreement

Below are the key terms of a consulting agreement:

How to Draft the Consulting Agreement?

Ensuing are the steps to follow while drafting a consulting agreement:

Benefits and Drawbacks of the Consulting Agreement

The benefits and drawbacks of having a consulting contract:

Generally, consulting agreements have a clause that includes the actions to be taken when a party breaches the clauses of the said agreement. Every agreement must have a detailed list of what acts or what omissions will amount to a breach of the agreement.

Alternatively, any other form of dispute resolution, such as mediation or negotiation, may also be mentioned in the agreement.

The agreement may also mention that any disputes arising under this agreement will be subject to the exclusive jurisdiction of a specified court.

In conclusion, a consulting contract is an essential agreement when a company hires an outside consultant to provide certain services that the company may not be able to handle effectively on its own. When such a consultant is hired, it is imperative to create a consulting services agreement to give effect to the terms agreed to by the parties. If such an agreement is not entered into by the parties, there will be no proof that such an arrangement was created by the parties. Also, there might be a conflict with regard to which party will have copyright over the work product created by the consultant. To avoid any such dispute, it is better to draft an agreement that clarifies these issues and protects the rights of both parties.

A sample of the Consulting Agreement can be downloaded from below. 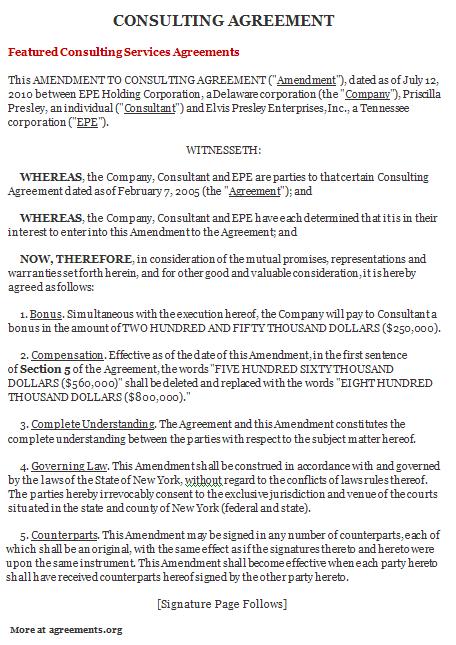 This agreement is made between the Company and Consultant on the effective date of 18th November 2011.

IN WITNESS WHEREOF, the parties “Company” and “Consultant” have executed this Consulting Agreement as on the date set forth, which is 11/18/2011 (MM/DD/YY).

SIGNED FOR AND ON BEHALF OF COMPANY BY:

SIGNED FOR AND ON BEHALF OF CONSULTANT BY: