When Do you Need a Collateral Agency and Inter-Creditor Agreement

When several organisations lend money to a company, they decide with the debtor company what the terms of the deal are, and they will also need to come to arrangements between themselves to establish how their competing interests towards that company will be handled in the event of a dispute. The purpose of the agreement is to outline clearly the relationship between the creditors and also to state how the collateral security will be held by the collateral agent.

This agreement is required as defining lien priority between two secured creditors is needed when both have security interests in the same collateral. In case of a senior/junior lender scenario, the lenders enter into this agreement to establish their respective rights. The reason for this is usually the senior lender will seek to be repaid first from the proceeds of collateral upon enforcement of the lien, while the junior lender will expect to collect from the remaining proceeds if any only.

Inclusions in a Collateral Agency and Inter-Creditor Agreement

How to Draft a Collateral Agency and Inter-Creditor Agreement

The following are the most important terms that should be negotiated by the parties before drafting the agreement:

Benefits of a Collateral Agency and Inter-Creditor Agreement

Consequences of Not Having a Collateral Agency and Inter-Creditor Agreement

If such an agreement does not exist between the creditors, each creditor will exercise his/her own resolutions at the same time and will be inconsistent. The entire process may be unethical and may turn into a legal mess in court. The senior lenders will have an upper hand and could wipe out the junior lender if they foreclosed on their interest in the first lien mortgage.

Key Clauses in a Collateral Agency and Inter-Creditor Agreement

The following are the key terms of a collateral agency and inter-creditor agreement:

Some agreements restrict a junior lender’s right to challenge a senior lien or limit them from exercising certain remedies. When such rights are waived by the junior lenders, they made be liable for breach of contract if they try to assert such waived rights. The court will, in most circumstances, enforce a well-drafted waiver.

Sample of a Collateral Agency and Inter-Creditor Agreement

You can download a sample Modification and Consolidation Agreement here. 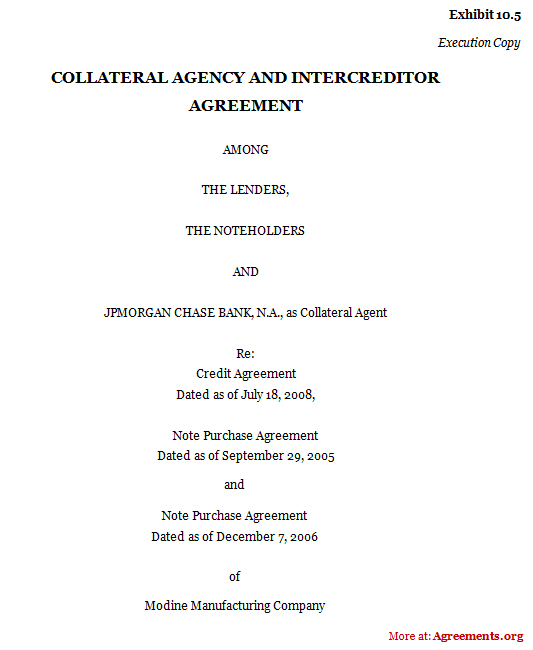