This greement is required to secure a loan transaction. The agreement acts as a safeguard against the borrower’s default and aids the lender to recover his dues by using the cash deposited in the collateral account in case the borrower is unable to pay the debts.

The collateral account control agreement generally has three parties to it, i.e. the Secured Party or the Lender, the Pledgor or the Borrower and the Security Intermediary with whom the collateral is deposited.

What Should Be Included in a Collateral Account Agreement?

The agreement should be drafted clearly and concisely. While the contents of the agreement may vary, a standard collateral account agreement template should typically include the following:

It is important to draft the agreement clearly. The agreement should include simple language and state the responsibilities/rights of the Pledgor, Secured Party and the Security Intermediary without the use of unnecessary jargon. It should precisely indicate the purpose of the agreement, and when the remedies under it can be evoked.

It is important to note that the agreement is only a security mechanism in a loan transaction and does not automatically allow the lender to claim rights on the collateral account.

It is advisable to hire the services of a seasoned attorney while drafting and negotiating an agreement if required. So, some things to keep in mind when drafting this agreement are

Benefits of a Collateral Account Agreement – Pros and Cons

Some of the advantages of this agreement are:

While the terms of an agreement may vary, it should contain the following information:

This agreement is a legal agreement wherein the debtor establishes a cash collateral account as security in a loan transaction. A well-drafted agreement enables a debtor to secure faster loans and facilitates faster recovery of dues for the lender borrower’s defaults in repaying the sum borrowed. 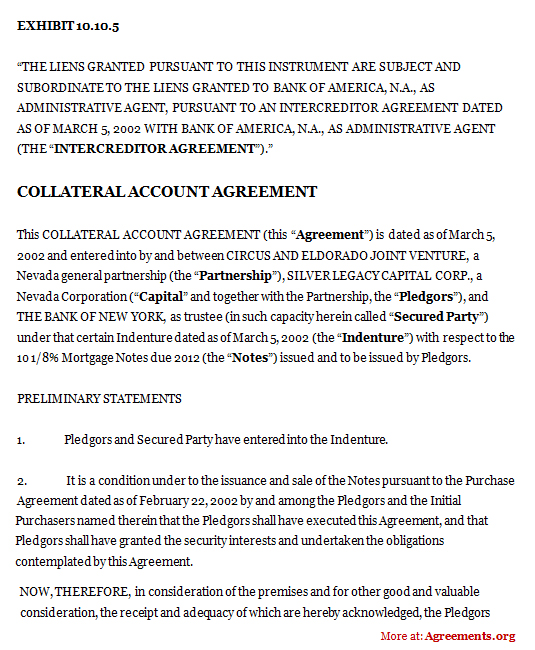