A clinical trial agreement is an agreement between an academic institution and a party who is sponsoring the clinical trial. It is a legally binding agreement that manages the relationship between the sponsor that may be providing the study drug or device, the financial support and / or proprietary information and the institution that may be providing data and/or results, publication, input into further intellectual property. The agreement outlines the details of what the clinical trial will cover and puts into writing the formal understandings of each party for the conduct of the study. It also contains the legal and financial terms related to the clinical study.

When Do You Need a Clinical Trial Agreement

It is important to have this agreement for allocation of risk, responsibility, funds, obligations, and the protection of academic, legal, intellectual property rights and integrity.

Inclusions in a Clinical Trial Agreement

The agreement should cover the responsibilities of both parties, terms of collaboration, requirements for payment and reimbursement, publication and intellectual property terms, indemnification and insurance, subject injury coverage along with, guidelines for dispute resolution.

Apart from this, the agreement must clearly mention under which law will it be governed and how the agreement shall be terminated. The manner in which the agreement is to be modified should also be described. If you’re not sure what terms could be included, you can always download a clinical study agreement template.

How to Draft a Clinical Trial Agreement

The following are the steps to follow while drafting a clinical trial agreement:

Benefits of a Clinical Trial Agreement

The following are the key terms of a clinical trial agreement:

What Happens When You Violate a Clinical Trial Agreement

Alternatively, any other form of dispute resolution such as mediation may also be mentioned in the agreement.

You can download a sample clinical trial agreement here! 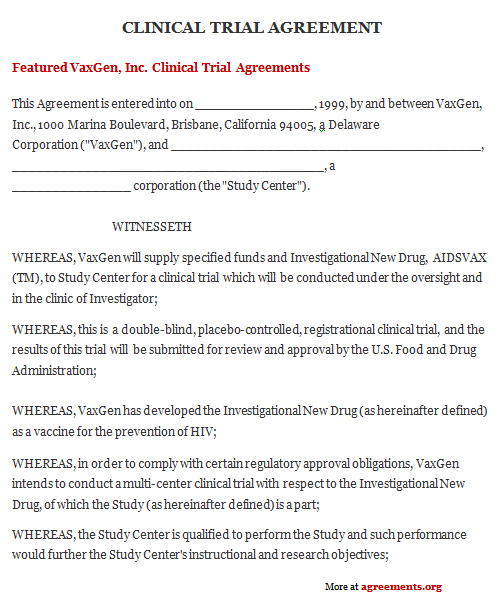 This agreement is made between the “Sponsor” and “Institution” on the effective date of 15th November, 2011.

IN WITNESS WHEREOF, the parties “Sponsor” and “Institution” have executed this Clinical Trial Agreement as on the date set forth which is 11/15/2011 (MM/DD/YY).

SIGNED FOR AND ON BEHALF OF SPONSOR BY:

SIGNED FOR AND ON BEHALF OF INSTITUTION BY: