What Is a Charity Plan Agreement?

A Charity Plan Agreement is drafted when a company or individual decides to donate money or other precious objects to a non-profit organization. The agreement is evidence of the deal signed between the donor and the donee, ensuring that the recipient of the Donation will not utilize the money inappropriately.

When Do You Need a Charity Plan Agreement?

This greement is signed between the donor (who plans on donating money) and the donee (recipient of the Donation). The agreement is needed to ensure that the donee will use the donated money for a proper cause, i.e., for the welfare of the needy.

The agreement assures the donor by guaranteeing the appropriate use of the charity. The organization (donor) can also demand a non-profit company to use charity for a particular cause, such as poor children’s education.

How to Draft a Charity Plan Agreement?

While drafting an agreement, ensure to include;

Additionally, you can add other clauses with the mutual consent of both parties.

Proper Utilization of Donation: This agreement ensures that the donee will use the money appropriately. As soon as the contract comes into effect, the donee will be responsible for using the charity for the given purpose.

Avoid Conflicts: This agreement is a legal contract that is drafted to protect the interest of the donating organization and the non-profit. It specifies all the terms that each party has to follow.

Protect the Interest: The contract protects the interest of donor and donee by laying out their responsibilities.

The key inclusions are

Both parties signing the deal must read and understand each clause mentioned in the contract before signing the agreement. Once the agreement comes into effect, each party will be required to abide by all the clauses.

If any party breaches the contract, they will have to pay the penalty. Failure to donate the promised amount, improper utilization of the donated money, or inability to stick to the terms and conditions of the agreement will result in contract termination.

Most charities have routine agreements that specify the obligations and rights of the donor and the charity. The larger the gift, especially when compared to other major gifts received by the non-profit, the greater the negotiating leverage of the donor. Charity Plan Agreement should memorialize the goals and objectives mutually agreed to by the donor and donee, and also build flexibility in case of unforeseen circumstances. 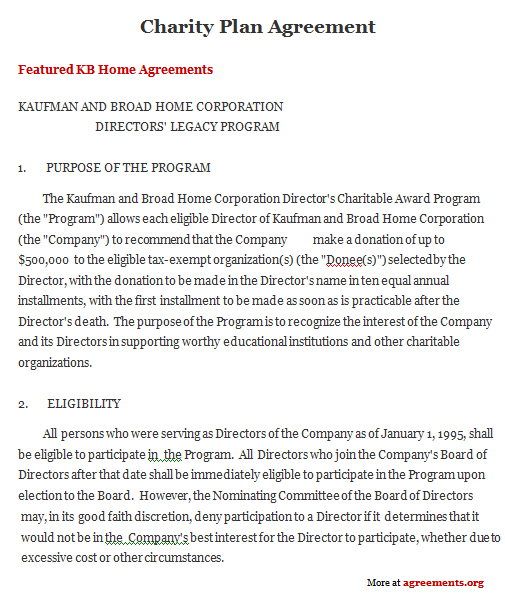 IN WITNESS WHEREOF, the parties “Donor” and “Donee” have executed this agreement as on the date set forth which is 11/15/2011 (MM/DD/YY).

SIGNED FOR AND ON BEHALF OF DONOR BY:

SIGNED FOR AND ON BEHALF OF DONEE BY: