A Business Separation Agreement is a legal document that is created when a aren’t business is separating from its subsidiaries and starting an organization of their own. This type of agreement is usually created between two parties, which are simultaneously known as the “Parent Organization” and the “Subsidiary”. In the event that the subsidiary has decided to separate from the parent organization, this document is created to take care of the legal processes and thus the name, Business Separation Agreement.

This contract which is a legal document clearly outlines the terms and conditions of the separation, the date from which the separation will come into effect and also the individual responsibilities of both the organizations after the separation has taken place.

When Do You Need a Business Separation Agreement?

The most common application of this contract and or legal document can be found when two organizations, which previously operated as parent and subsidiaries, have decided to separate and start acting as separate entities. This agreement is a legal document that outlines the terms and conditions of the procedure, along with all the other details of the transaction.

This document is legally binding, and thus can be presented in court if there ever is a need for the same.

How to Draft a Business Separation Agreement?

Follow the mentioned below steps in order to draw a Business Separation Agreement.

Benefits of a Business Separation Agreement

The benefits of having a Business Separation Agreement are outlined as below.

Cons of not having a Business Separation Agreement 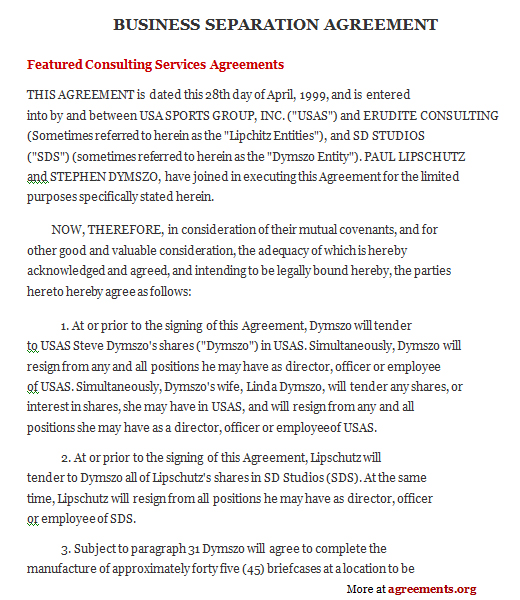 This agreement is made between the Parent Company and the Subsidiary Company on the effective date of 12th November, 2011.

IN WITNESS WHEREOF, the parties “Parent Company” and “Subsidiary Company” have executed this Business Separation Agreement as on the date set forth which is 11/12/2011 (MM/DD/YY).

SIGNED FOR AND ON BEHALF OF PARENT COMPANY BY:

SIGNED FOR AND ON BEHALF OF SUBSIDIARY COMPANY BY: