What is an Assumption Agreement? An assumption agreement is an agreement whereby a contractual debt or an obligation of one person is assumed by another person. Through this agreement one party agrees to assume the interests, responsibilities, rights and obligations of another party with respect to a separate agreement made between the latter and a third party.

When Do You Need an Assumption Agreement?

An assumption agreement is needed when a party to a contract is unable to fulfill his rights and duties under a particular contract and wants to transfer these rights and duties to a different person. A party may no longer be able to perform his part of the contract due to a change in his equity or liquidity, the viability of his business or due to any other reason. In such a circumstance it becomes necessary that an incapable party is replaced with a party who is able to satisfy the obligations and exercise the rights under the contract.

Hence, the purpose of the assumption agreement is to make sure that the purpose for which the original contract was entered into is achieved and that a person who is able to perform the contract in a better manner is made a liable party to it.

Inclusions in an Assumption Agreement

The agreement must clearly show that the Assignor is transferring and the Assignee is receiving the rights and duties under the original contract. The date on which the assignment shall be deemed to be complete must also be mentioned in the agreement.

How to Draft an Assumption Agreement?

An assumption agreement sample may be used as a reference for drafting such contracts. The following points should be considered while drafting these contracts.

Benefits of an Assumption Agreement

Consequences of Not Having an Assumption Agreement

Key Clauses in an Assumption Agreement

The following are the key terms of an assumption agreement:

Sample of an Assumption Agreement

If you require a template of an assumption agreement, you can download a sample here. 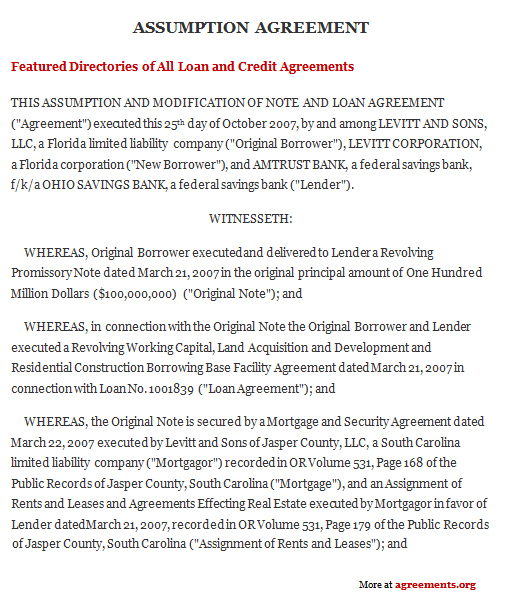 
This agreement is made between the Seller and the Acquirer on the effective date of 11th November, 2011.

This Assumption Agreement shall be active when the parties “Seller” and “Acquirer” set their seals as on the date 11/11/2011 (MM/DD/YY).

SIGNED FOR AND ON BEHALF OF SELLER BY:

SIGNED FOR AND ON BEHALF OF AQUIRER BY: