A Brief Introduction About the Assignment Agreement

Sometimes even the biggest of companies need a helping hand when it comes to finishing a task, and this agreement helps in the smooth hiring of an external agency for a short amount of time. This agreement, which is sometimes referred to as an Assignment of Contract agreement, contains the specifications of the project, the credentials of both the organizations in context, as well as the total duration for which the additional help is being hired.

Purpose of the Assignment Agreement – Why Do You Need It?

Contents of the Assignment Agreement – Inclusions

Involved Parties: In this agreement, there are usually two parties involved, the first being the party who needs help from an external agency and or organization, and the second being the party who is being hired to help with the extra efforts. In legal terminology, the first party is referred to as the Assignor, the second party as the Assignee, and the legal document is referred to as the agreement.

Application: This contract constitutionally is applicable within the boundaries of the state, city, or county where it was originally drawn at.

How to Draft the Assignment Agreement?

An Assignment Agreement can be drafted by simply following the steps mentioned below.

Organize a meeting both the parties and discuss upon the terms and conditions of the agreement, such as the details of the venture, the number of employees that are needed, the time for which the employees will be hired, the work material, the equipment, and most importantly the amount of funds that will be invested for the same.

Once the primary and secondary parties have agreed to all the conditions, reach to the lawyer, and ask him to draw up an Assignment Agreement according to the specifications discussed.

Get both the parties to sign the contract and get it registered in a house of law, as suggested by your lawyers.

While negotiating the formation of an agreement, it must be taken care that the individual interests of both parties must be addressed along with the collective cause.

Benefits & Drawbacks of the Assignment Agreement

The most significant benefits of having an agreement are as follows.

Benefits of Having an Assignment Agreement

Cons of Not Having an Assignment Agreement

In the absence of an Assignment Agreement, neither of the parties have legal proof of an understanding taking place between two entities, and thus if the matter is ever brought to court, both parties stand to lose.

In the case of violation of an Agreement, certain remedies come into effect, and in a few cases, the contract is dissolved, and a new set of terms and conditions are agreed upon.

An Assignment Agreement is created with the intention of increasing the efficiency in a collaborative project. It helps to mitigate the risk of a dispute, hassles, and any confusion that might arise in the future. Thus it is always suggested that companies create an Assignment Agreement when there is a need for hiring external help and or additional employees. 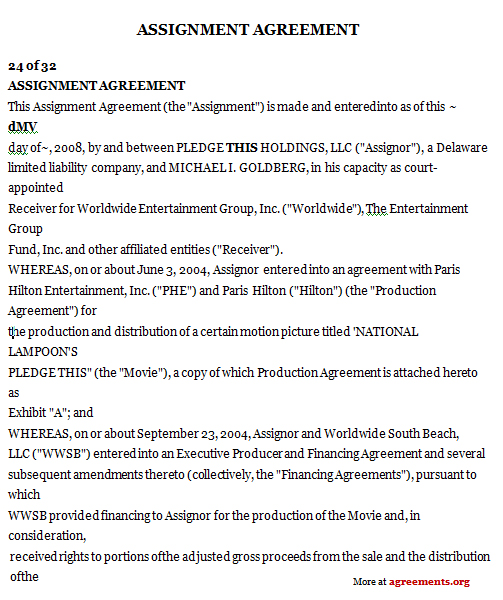 This agreement is made between the Contractor or Assigner and the Vendor or Assignee on the effective date of 10th November 2011.

IN WITNESS WHEREOF, the parties “Assignor” and “Assignee” set their hands and seals as of the date 11/10/2011 (MM/DD/YY) by their duly authorized representatives.

SIGNED FOR AND ON BEHALF OF ASSIGNOR BY:

SIGNED FOR AND ON BEHALF OF ASSIGNEE BY: