An amended and restated pledge agreement is a contract to modify an existing contract of pledge. A pledge agreement or a contract of the pledge as it is commonly called is an arrangement between the pledger and the creditor, wherein a personal possession of the pledger is transferred to the creditor in lieu of the loan borrowed. Such a contract acts as security for the lender and reduces financial risk. Such a contract can also be on a tripartite basis. For example, the holding company can pledge its properties to the lender to enable the subsidiary to avail loans. If the parties wish to carry out modifications in the same, then an amended and restated pledge contract is drawn up.

Purpose of an Amended and Restated Pledge Agreement

An amended and restated contract of pledge, as the name suggests captures the alterations made in the original pledge agreement and restates the terms. It serves the purpose of having a definite document in writing which reflects the intention of the parties to modify the terms of the original contract. It assures both the creditors and the borrowers of their rights and obligations respectively.

Inclusions in an Amended and Restated Pledge Agreement

Apart from the modified terms of the original contract, an amended contract of pledge also needs to include standard boilerplate clauses. These clauses become all the more important, this being like an amendment agreement. Hence, terms such as dispute resolution, severability, waiver, and remedies should necessarily be included. Caution be to draft the entire agreement clause carefully, as this along with the original contract would be read as the whole agreement.

Key Terms of an Amended and Restated Pledge Agreement

The key terms of an amended and restated pledge contract are:

Drafting of an Amended and Restated Pledge Agreement

The following guidelines need to be followed for the drafting of an amended and restated contract of the pledge:

Benefits of an Amended and Restated Pledge Agreement

Following are the benefits of an amended contract of the pledge:

Cons of an Amended and Restated Pledge Agreement

Following are the cons of an amended pledge agreement:

An amended and restated pledge agreement helps the parties capture modified terms and hence, prevents a contract from becoming redundant. Being a contract which is purely the product of negotiations based on mutual consent, disputes seldom arise. However, if they do then they should preferably be settled through mediation or arbitration. 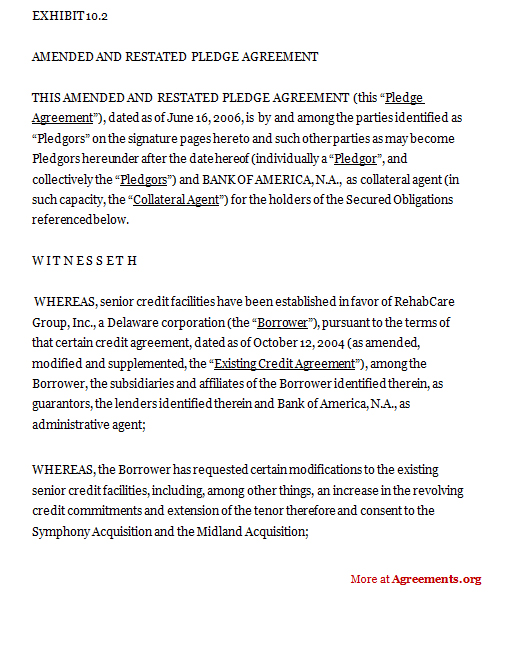