An amended and restated credit agreement is a contract that has been amended multiple times and stands altered. This includes the fresh clauses along with the original agreement and thorough inclusion of all the previous amendments. Thus, it may be concluded that an amended and restated document would include all the past amendments along with any key or new changes that have been made up to date.

These agreements tend to crop up in the context of organizational documents that may have many amendments over time. In financing transactions, the parties tend to use amended and restated credit agreements, mostly intending to secure the obligations of the original credit agreement.

One of the key purposes of this agreement is to simply ease the process of comparison and analysis. Since all the clauses are listed with their due application and deadline, side by side comparison of the original and new contract is mitigated, and the analysis of change becomes easier and more efficient. It eases the process of drafting, as it retains the original document and at the same time establishes the amendments that the parties would like to introduce. It mitigates the need for multiple agreements governing just one contractual relationship thereby saving both time and paperwork for both the parties.

Inclusions in an Amended and Restated Credit Agreement

An amended and restated credit contract requires the inclusion of standard boilerplate clauses. Being in the nature of an amendment contract, such an agreement should ideally contain the entire agreement and severability clauses.

The key terms of a form of Amended and Restated Credit Agreement are as follows:

The following guidelines must be followed to draft this contract:

Following are the pros of this contract:

A lawyer may, instead of drafting a fresh contract, alter certain clauses thereby changing or altering the relationship instead of nullifying the original contract. A single amended and restated agreement be easier to read than that of an original agreement and a separate amendment. These contracts allow the initial credit or loan agreement to be altered so as to suit the current relationship while retaining some pre-existing clauses which may still apply to both parties. 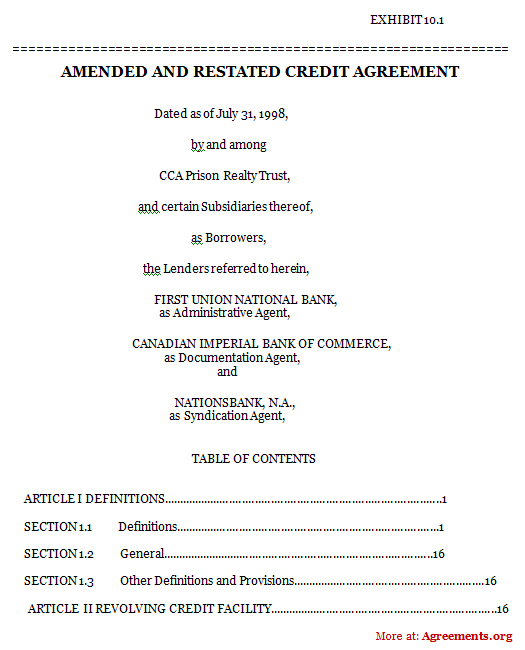