The aircraft purchase agreement, sometimes also referred to as aircraft sales agreement provides the details of how the aircraft will be operated and transactions that happened between a seller and purchaser of an aircraft. This agreement helps to know the expectations of both the purchaser and seller of the aircraft to avoid misunderstandings.

What Is an Aircraft Purchase Agreement?

This is a legally enforceable document made between a buyer and seller of an aircraft. The aforesaid agreement provides the details of the aircraft purchased and mentions the identity of the seller and buyer of the aircraft.

What Is the Purpose of an Aircraft Purchase Agreement?

This agreement outlines the purchase terms for the aircraft so that the rights and obligations of both parties are clearly mentioned in the contract. This clarifies the contractual performance as part of the contract.

Contents of an Aircraft Purchase Agreement

How to Draft an Aircraft Purchase Agreement?

When signing an aircraft purchase agreement form, some points need to be considered in the process.

Negotiation as part of the aircraft sales agreement, apart from the purchase price, happens regarding the inspection authority as well the ability for trials. The other aspect about negotiation would be about the sharing of liability before completion of contract or delivery of the aircraft.

Benefits of an Aircraft Purchase Agreement

One of the essential benefits of having this agreement to avoid any sort of misunderstanding the confusion between the seller and purchaser of the aircraft in the future. This will help to know the expectations of both the purchaser and seller of the aircraft to avoid misunderstandings. Just having a contract does not obligate the parties to perform. A well-drafted purchase agreement can act as sound evidence in a court of law against the breaching party.

In case of violation of this agreement on the part of both the parties involved, they can sue each other of breach of contract and also claim for compensation considering the terms and conditions of the agreement. In case the agreement provides the remedies for breach of agreement, then the parties can settle the dispute accordingly.

This agreement these days considered a formally required document for the purchase of an aircraft to maintain transparency and also to avoid disputes if arise in future between the seller and purchaser of the aircraft as it provides how the aircraft will be operated and transactions happened between the parties. 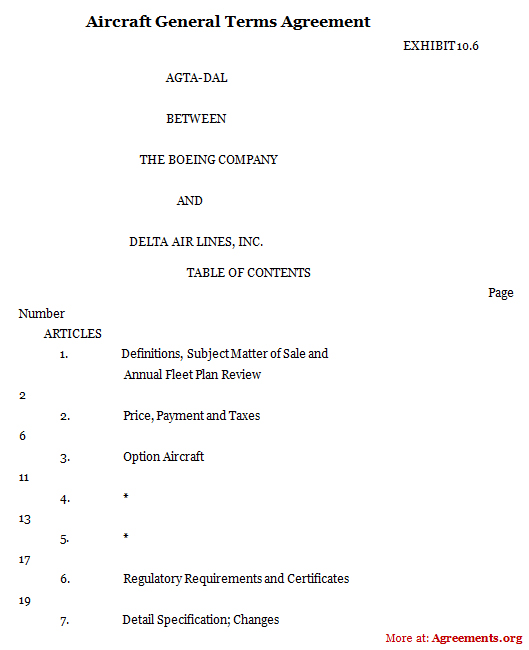