Here the role of the representative is to narrate the various policies of a company to the clients. The media representatives might include newspapers, advertising agencies, television production companies, and social media sites. It is also known as a sales representative agreement or advertising sales agreement. It is one of the very important tools in the marketing business. Outsourcing is more often used these days by various companies in different fields of business including marketing of their products and services.

When Do You a Need Advertising Representative Agreement?

For attaining high sales many companies hire outsource representatives who can effectively do the marketing of their goods and services. The purpose of advertising representative agreement is to state the outline of the terms and conditions on which the representative agrees to work on following the federal and state laws related to the field of sales in order to advertise the products of the company. It can also be used by the sales representative agency or an individual who wishes to define the conditions with a company.

The agreement is signed between three parties who agree on the same terms and conditions stated in the contract. The three parties involved include:

The agreement includes all the details and signatures of all three parties involved. The effective date is the date from which the agreement is applicable and the representative is answerable to the company in which he is hired.

How to Draft an Advertising Representative Agreement

The consequences of not having an agreement might result in future conflicts between the parties related to advertisement details or payment.

Apart from the basic information like the contact details of parties involved, effective dates, and payment details, the advertising representative agreements also include some other details. The essentials of this agreement include:

Here is the sample of the advertising representative agreement. The same can be downloaded as a PDF file and include the terms according to your needs. 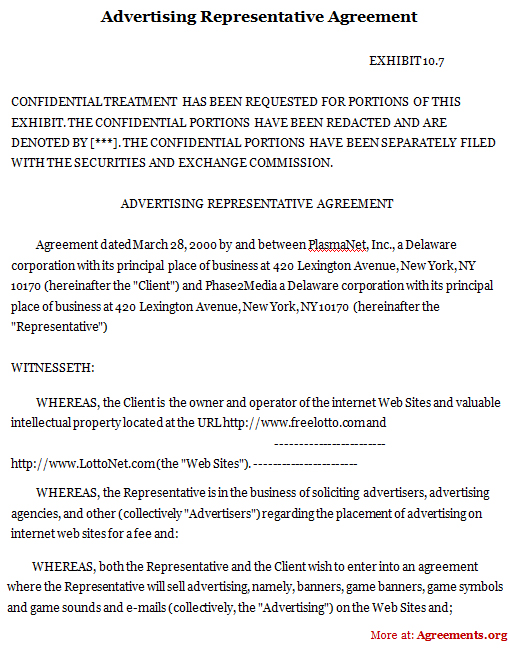