An Acknowledgement and Pledge Agreement defines the relationship between the borrower, pledgor and creditor, the former two being parent and subsidiary companies. It is typically entered into in the event of a loan borrowing by the subsidiary. It facilitates the subsidiary to borrow loans and at the same time provides security to the creditor. A collateral is typically securitized in lieu of the loan by the parent company.

What is Acknowledgement and Pledge Agreement?

Before proceeding with the draft of this agreement, following information should be kept in mind: who are the parties (this is important, as mostly this is a tripartite agreement), which party is the parent and which is the subsidiary, the risk exposure of the loan taken, the asset to be securitised, the value of the collateral and the events which may be characterised as default.

Purpose of Acknowledgement and Pledge Agreement

An acknowledgement and pledge agreement assures the creditor that its loan will be repaid. Its main purpose is to provide a sense of security to the creditor and at the same time facilitate subsidiary companies to avail loans. Creditworthiness and capacity to repay is an important factor in the sanctioning of loans. Where the parent company acknowledges and pledges the repayment of the loan and also provides a collateral for the same, it is easier for the subsidiary to be granted the loan. Moreover, having such an agreement in place also enables the parties to understand their rights and obligations clearly.

Inclusions in Acknowledgement and Pledge Agreement

An Acknowledgement and Pledge Agreement should essentially include the names of the parties, their registered addresses, effective date, etc. Apart from the key terms mentioned below which are specific to the particular agreement, a set of boilerplate clauses such as notice, termination, dispute resolution, etc. should also be included.

The key terms to be included in this agreement are:

Drafting an Acknowledgement and Pledge Agreement

The following guidelines may be followed while drafting this agreement:

The following are some of the sample clauses:

The importance of this agreement lies in the fact that it enables the parent company to stand guarantee for its subsidiary. In case of violation, legal action may be resorted to. The dispute resolution clause would outline the various alternatives that may be taken in the event of a breach. An interim injunctive remedy may also be obtained to prevent the collateral from being disposed of. It is advised to list out all possible remedies in the acknowledgment and pledge agreement.

Sample for Acknowledgment and Pledge Agreement 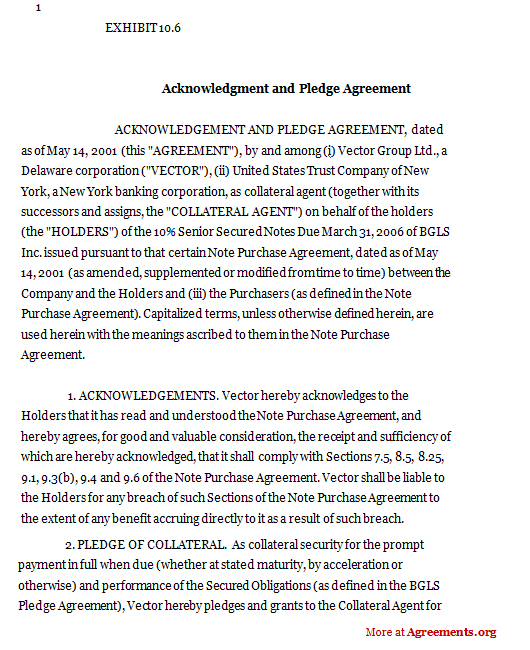